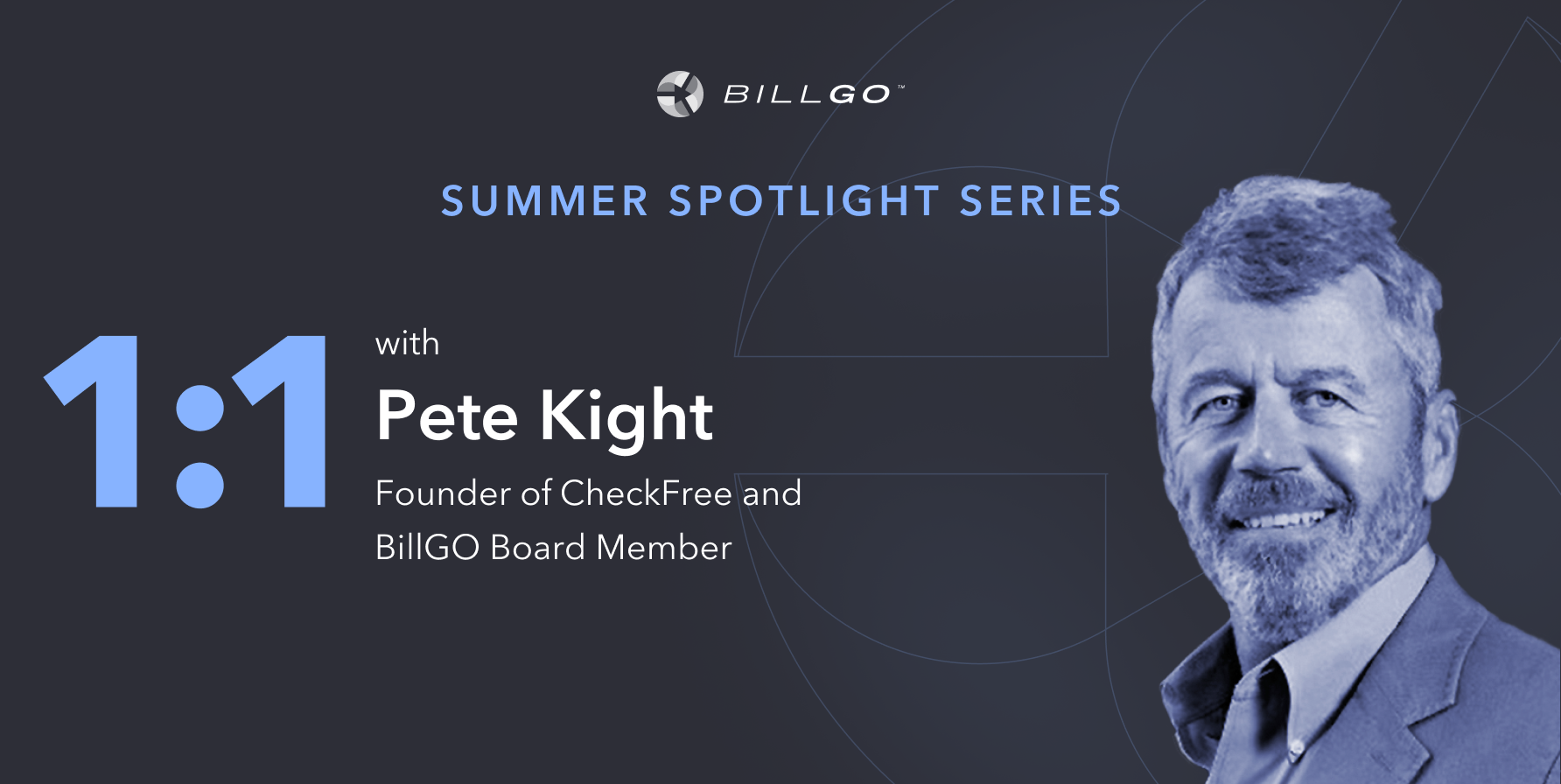 We regularly interview BillGO executives to discuss what’s going on in the industry. This summer, we took a different approach and talked to leaders outside of BillGO to get their take on industry trends.

We sat down with Pete Kight, who launched CheckFree in 1981 and turned the payments industry on its head. Launched as a one-man operation Kight ran from his grandmother’s basement, CheckFree eventually employed nearly 5,000 people and earned more than 100 technology patents. At its peak, CheckFree served approximately 10,000 financial institutions and 15,000,000 consumers worldwide. When he sold the company in 2007 (for $4.4 billion), CheckFree was generating more than $1 billion annually.

Today, Kight serves on multiple corporate boards - including BillGO’s Board of Directors.

For those unfamiliar with your story, let’s recap: You tore a hamstring in college, which sidelined your athletic aspirations. You took a job managing a small chain of health clubs, but you were frustrated by the inability of your customers to pay their gym dues electronically.

Out of that frustration, you launched CheckFree, which pioneered electronic bill payments. You had no background whatsoever in banking or payments, yet you completely transformed the way money moves around the globe.

It is. As a child, I had what we now call ADD. That led me into athletics and athletics got me through school. Track was going to be my thing, but my hamstrings let me know exactly how far I was going to get as a track star. I tore a hamstring and — halfway through my senior year — bailed on college.

An opportunity opened to run a chain of fitness facilities. It was the classic story of being naive, but sometimes being naive forces you to come up with better ideas. You don’t know what you don’t know.

We were expected to ask our customers to write a check in order to renew their membership dues every year. That meant we kicked our customers out every year and then asked them to come back by writing a check. I said, “this doesn’t make any sense.”

Entrepreneurship is about asking and asking. So, I started asking banks to help me set up electronic payments. They all said it couldn’t be done. Then I spoke to an insurance executive who explained to me that Social Security payments were issued electronically through Automated Clearing House (ACH). At that time, ACH was the only Electronic Fund Transfer (EFT) that existed, so the two terms — ACH and EFT — were used interchangeably.

That was the extent of my scientific analysis in creating an electronic payment system. It helps to be naive because I decided I would harness ACH technology. I just didn’t know how complicated it would be, or how much hard work it would require. I just knew I had to take care of my customers.

The story goes that you approached 250 banks about creating an electronic payments platform and 200 said “no.” The other 50 said “hell no!” Is there a lesson in there for aspiring entrepreneurs?

Yes. The lesson is all “no’s” contain an opportunity. You just need to look at things differently when you hear the word “no.”

When bankers told me “No!,” it meant I wasn’t going to have to compete with them. Those “no’s” told me these guys were blind; they couldn't see what I was proposing.

Eventually, the banking industry realized electronic payments could be done, but by that time, we were already working with personal finance pioneers like Quicken. We didn’t have much market penetration, but we learned something important: consumers will trust companies like Quicken to manage their data, but they will only trust their banks to manage their money. That was a revelation to us.

Later, of course, banks became much more open to what we were doing. We realized the issue: they didn’t want any other brands inside the banks. Well, we weren’t worried about our brand; we just wanted to make money. So, when banks white-labeled CheckFree, that was fine with us.

Not only were you facing competition from financial institutions (FIs), but big tech companies were trying to electronify payments. What did CheckFree do right that your competition missed?

Well, we didn’t have much money and we weren’t very smart. Our competitors — which included Microsoft, American Express and others — had a lot of smart people and a lot of money.

But “payments” is a messy market. It includes everything from doctor's offices to lawn-care providers to utility companies to credit card processors and lenders. That’s not a market; that's a lot of markets. And they all have their accounts receivables (AR) and accounts payable (AP) departments that do things differently.

Our competitors were in a hurry. Our advantage was we were not. We knew we had to create something that would work for all AR and AP departments — and those departments didn’t care about speed.

We called what we were doing messyware. We knew we weren’t going to beat the competition with money or technology, we were going to do it by doing the messy work directly with AR and AP people to find out what they needed. For a while, we practically lived with them. It took time, but that’s the beauty of messyware.

It’s 2021. Why do so many small- and mid-size businesses (SMBs) continue to lean so heavily on paper checks?

With many SMBs, there isn’t a CFO. There might be a bookkeeper or maybe the founder’s mother handles the accounts. They might only be processing 200 bills a month, but it’s their job.

So, when someone shows up and says they want to digitize the process, they might feel threatened. That’s one of the reasons this takes so long.

But SMBs are beginning to see it shouldn’t be this way. SMB people go home at night as consumers. They go online and deal with everything in real time. Then the next day, they are back at work dealing with all this paper. More and more, SMBs are realizing there is a more efficient way.

You worked for 18 months alone building a relationship between CheckFree and Bank of America. That might be one of the earliest examples of a fintech collaborating with a major FI. Did it seem revolutionary at the time?

We didn’t call ourselves a ‘fintech’ back then but, looking back, it may have been the first case of a major bank leveraging financial technology.

Is the collaborative climate between FIs and fintechs better now than when you started?

No question. It’s still not as good as it should be, but it is better.

Fintechs have found out that earning consumer trust is a lot harder than they anticipated. When you talk about people’s money, people must trust you and earning trust is hard.

At the same time, FIs have realized how bad they are at innovation. It’s understandable. The whole FI model is based on managing risk. Taking a culture based on risk management and trying to embrace innovation is nearly impossible. That’s why it’s hard for banks to be disruptive.

Fintechs are good at innovation and FIs see an opportunity there. They know they must work with fintechs. They’ve seen the numbers and it scares them. Fear is a wonderful motivator.

Over the next three years, I think you’re going to have a lot more collaboration between FIs and fintechs. For those FIs that haven’t figured this out, they won't be in the banking business for much longer.

In what ways can FIs move faster?

FIs have a good reason to move slowly: people trust their banks to manage their household money. Fintechs come and go, but banks have built a very solid, deep trust with their customers.

But right now, the moat protecting banks as the “trusted manager of household money” is getting mighty thin. More and more, consumers are trusting Marcus, Charles Schwab and others to manage their money.

FIs have a good reason to speed things up now. History is rife with the skeletons of businesses that thought they were protected.

Is it easier or more challenging to launch a fintech now compared to when you were coming up?

It’s a lot easier now to get the funding. There are more VC firms out there than I could ever have imagined.

But, if you launch a fintech today, you need to know 10 other competitors are doing the same thing. It’s easy to raise money, but it is much more competitive.

You serve on BillGO’s Board of Directors. What did you see in BillGO that made you want to be part of the Board?

When I sold CheckFree in 2007, we shared our roadmap with the buyers and it included the next five things we intended to do to advance the company. They listened to us but made it clear they weren’t interested in advancing it. They said “Thank you. We’ll take it from here.”

BillGO is doing many of those things we planned for CheckFree.

Bill pay is one of the stickiest products out there. Paying bills is something everyone must do, but paying bills means moving other people’s money around. You can’t settle for getting it 99 percent right. You must get it 100 percent right and BillGO is the first company I’ve seen that recognizes the value in doing it correctly.

You also run Torbreck Vintners with the goal being to “become one of the world’s great wine marques.” What is it about wine that appeals to you?

It’s a counterbalance. I was fortunate with CheckFree in terms of the opportunity and technology that was available — more fortunate than I ever thought I had the right to be.

But it required me to be inside all the time. The first time I was exposed to a winery, I reached down and put my hands into the soil while I listened to the growers explain how wine is made. I was feeling the soil that produced the wine we would drink that afternoon. It fascinated me.

For me, wine represents a counterbalance to all those years I spent indoors working on something intangible. Growing wine allows me to spend an equal amount of time outdoors doing something tangible.

The financial services industry is missing out on $700B opportunity by not thinking female first.
Sep 22, 2021

BAI, one of the country's top banking organizations, invited Dan Holt to kick off its 2021 podcasts by discussing why banks to to embrace optimized bill pay technology.
January 7, 2021

A sit down with BillGO's CRO discussing what he hears when meeting with banking executives concerned about bill pay technology.
December 9, 2020