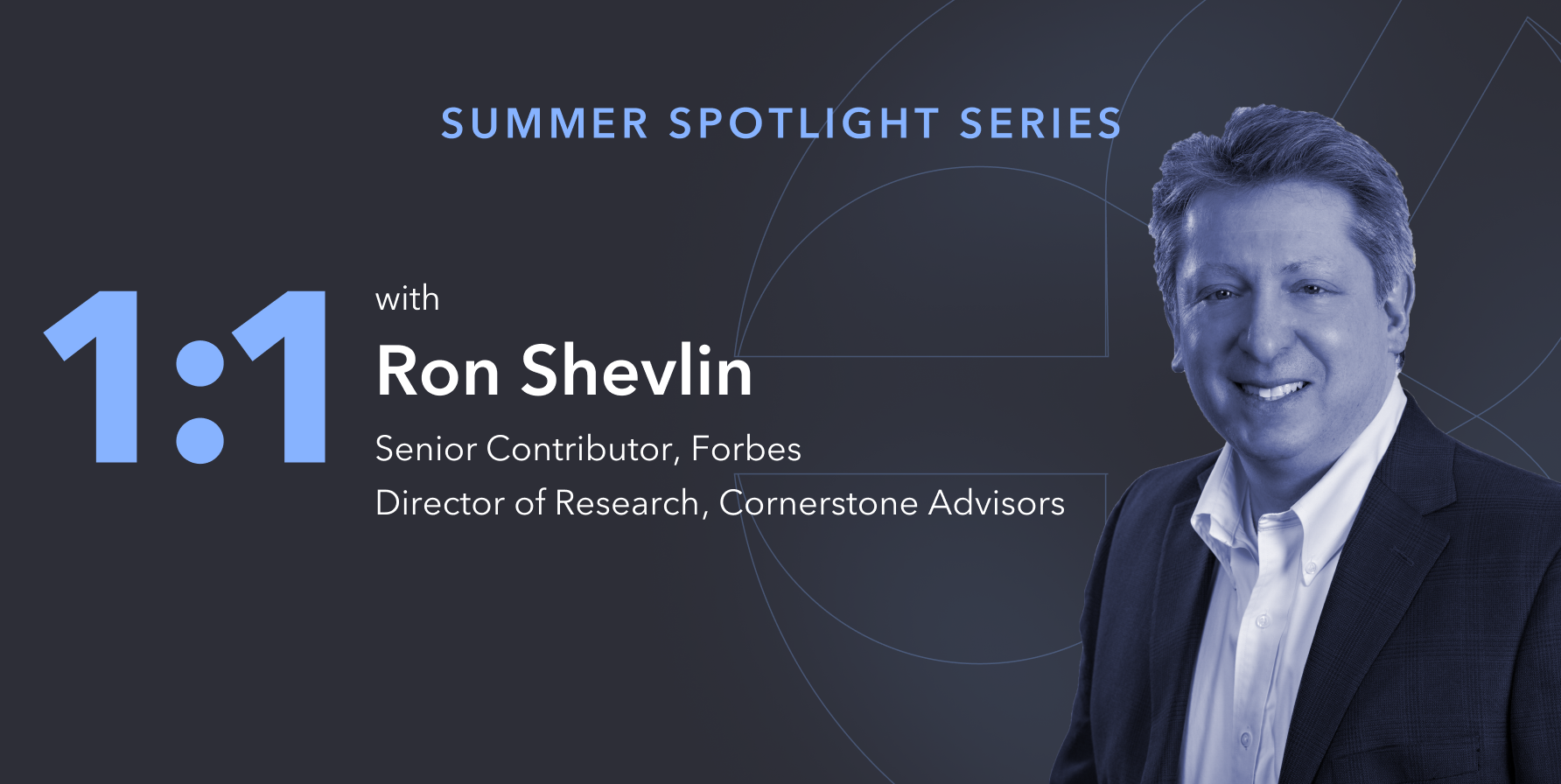 BillGO regularly shares insights from our executive team so others can gain from their extensive fintech and financial services experience.

With the summer here, we’re stepping outside the walls of BillGO to find out what’s on the minds of other leaders in the industry.

This time out we spoke with Ron Shevlin.

Shevlin is the Managing Director of Fintech Research for Cornerstone Advisors. In addition to helming Cornerstone’ research efforts and trend tracking, he also contributes the ongoing Fintech Snark Tank column to Forbes. Shevlin is also a frequent keynote speaker at industry events. Follow him on Twitter or connect on LinkedIn.

How have digital banking and consumer payments been impacted by COVID?

People couldn't go to the branches, they didn't want to use the phone, so even digital- and online-banking holdouts realized you’ve got to get to your account somehow.

Mobile banking adoption was already high among Gen Z and Millennials and practically ubiquitous among Gen X, but even older generations like Gen X and Boomers (we're talking over half of all people now) are now doing some form of mobile banking.

On the payment side, there was a big shift away from cash because early on people were afraid paper money might spread germs. But those fears carried over to things like touching and swiping cards. As a result, there has also been a big shift to digital and contactless payments.

An unintended consequence of this shift has been a subsequent shift away from the notion of a primary debit and credit card account. What we found in our research is that about 30 percent of Apple Pay users and 40 percent of Google Pay users don't link their mobile payment accounts to either their primary debit or primary credit card. This change in consumer behavior shifted transactions to a lot of secondary and even third-tier checking accounts and credit card providers.

Will those trends stick around post-COVID?

From a transaction perspective, I don’t think things like mobile banking,  mobile deposit or checking account balances will revert.

What I think may revert will be interactional. While the pandemic caused a lot of people to interact with their financial institutions (FIs) through digital channels and online chat, consumers don't see it as ideal. They like to talk to face-to-face with a bank representative, especially if they're filling out forms and have questions. So, we'll likely see some reversion of behavior from an interaction perspective, but I don't expect the transactional activity shift back.

There's been some talk about increased customer loyalty due to COVID.

Loyalty is a funky term. First, we have to define what you mean by it.

Many FIs brag about their single digit attrition rates. Five, maybe even 10 years ago, attrition rates were generally somewhere between 10 and 20 percent for FIs. Today they're in the single digits. So, a lot of FIs think their customers are much more loyal now.

People are opening up multiple checking accounts to get specific features. They like early access to their paychecks for instance; or they open up an account that offers international money transfer capabilities. They might open up another account because it offers personal finance management (PFM) capabilities. We’re also seeing a lot of the payment behavior shifting as well.

Also, people are now starting to pay with cryptocurrency. PayPal not only offers consumers the opportunity to buy or invest in crypto through the app, but then to actually use it to make payments with the PayPal app.

All of this behavior signals to me that consumers are not that loyal from a behavioral perspective, even if they're loyal from an account holding status.

I think a lot of FIs need to rethink what loyalty means to them and recognize, too, that this is the new world customer.

What are your thoughts on ‘Buy Now, Pay Later’ banking?

There’s a lot of press about buy now, pay later (BNPL) functionality, but I think its overhyped to a certain extent - especially here in the U.S. I estimated BNPL purchase volume was about $20 billion in 2019; in 2020, it grew to $25 billion. But, when we're talking about nearly $5 trillion in total retail sales, $25 billion is still a drop in the bucket.

One-out-of-five Millennials have completed some form of BNPL transactions in the past two years. I don't expect it to grow a huge amount for older consumers, but I think it will take hold with Gen Z as they get older and have more robust financial lives.

BNPL tends to displace some of the credit card and debit card payments. We also look at what's happening from a merchant app perspective. Obviously, Starbucks has been the poster child for this for years with people loading up funds on their Starbucks app.

More and more, merchants are issuing those types of apps. I’ve estimated that, at any point in time, there’s a few billion dollars each week moving in and out of merchant apps.

How about bill pay? Can FIs win back consumers who pay their bills directly to biller sites?

Bill pay is a tough challenge facing FIs, but I do think they can do it. However, I think the strategy has to change and there needs to be better technology involved.

But, by doing that, the consumer gives up the ability to have a big-picture view of their bill pay trends and habits. And I don't see a lot of billers providing analysis capabilities about how their bills compare to anyone else’s. Wouldn’t it be great if you could go to one place to manage all your recurring bill and subscription payments or get access to tools and services to help negotiate better rates or lodge complaints?

These are the types of tools FIs should be offering to help raise the value proposition for paying bills through a digital banking site or an app versus paying the biller directly. It's not enough for FIs to make convenience the argument. They need to deploy a value-add strategy as well.

Let’s talk about real-time payments (RTP). Hype or reality? When will RTP impact the market in a meaningful way?

I actually think RTP is going to have an impact sooner than people think because there are efforts going on with The Clearing House that are available today versus waiting for FedNow.

To truly understand the impact of RTP, you've really got to look at it from a segmented perspective. There are consumers in the lower- and middle-income ranges who would clearly benefit from faster payments, especially as it applies to them receiving money. RTP could help eliminate - or at least alleviate - the need to get early access to your paycheck. And RTP completely changed that game.

But, I think the bigger impact for real time payments is actually in a B2B setting. And there are a lot of companies working on that.

From a P2P perspective, I think what's going to help accelerate a lot of this is emerging embedded finance. Take a look at what Square does: they offer next day payment to the merchants on their platform for no additional cost. Now, they will offer the ability for the merchants to get same-day payments for an additional fee. It’s not a big leap from there to offer a Square checking account for businesses where the money is there immediately, automatically and for no additional fee.

Is there any new data you’re seeing that surprises you?

Actually, there was one thing that really surprised me in a survey I just conducted. I was looking at channel behavior, wanting to understand, not what consumers prefer, but what were they doing? What are they actually doing? What channels do they actually use when they have to dispute a fee, or open an account, or report potential fraud, or just have general questions?

And I don't think that it's at odds with making money because it's a business-model problem. Sure, FIs make interchange [revenue] when customers spend a lot of money on a credit- or debit card, but maybe [consumers] shouldn't be spending that money in the first place. It wasn't good for their financial health.

FIs have to flip the business model on its head: instead of making money by encouraging consumers to do things that may not be in the their best interest, FIs should provide tools to help consumers better manage their financial lives – and charge for those tools.

We have a history in financial services where a lot of the new technology features have come out in the last 25 years - online banking, mobile banking, online bill pay bills, PFM, etc. And it’s all been bundled under “free checking” with the idea that it would increase loyalty and pay off in terms of expanded relationship – and that simply has not worked.

FIs have to re-engineer the business model and charge for the things consumers value because they will pay for those things. I recently saw some research where a significant percentage of consumers said they’d pay a dollar or two a month for that kind of feature.

People will pay for things they value. But unlike practically every other industry, there really is no pricing function in an FI that resides within marketing. It's a risk function. FIs price based on risk, not based on consumer demand.