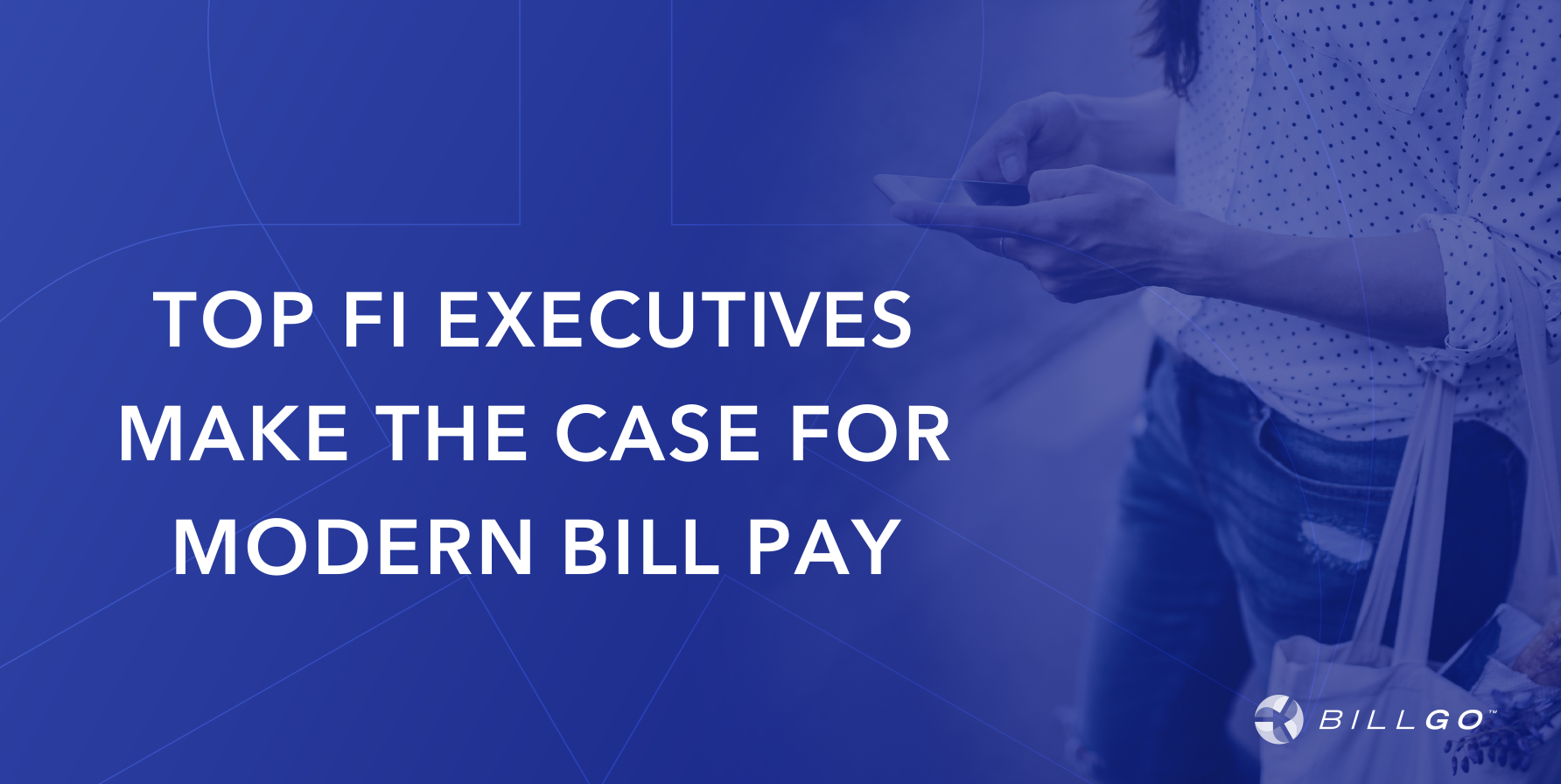 Where the first installment, How Americans Pay their Bills, focused on what consumers are looking for in bill pay technology, the follow-up webinar offered attendees a chance to hear directly from industry executives who transitioned their organizations to modernized bill pay platforms.

Hadesty kicked off the conversation recapping findings discussed in the first webinar. He began by reminding attendees that 76 percent of consumers choose to pay their bills directly to billers - even though most say they trust their financial institutions (FIs) more than they do billers.

With that, he turned the conversation over to the panelists to hear what compelled them to transition their  organizations to modernized bill pay.

“There is an interesting dichotomy happening in FIs right now,” said Sheehan. “Ask any Chief Digital Officer if bill pay is important in their organization, and the answer will be a resounding ‘Yes! It’s a key component to the digital ecosystem. It’s table stakes. You must have it and do it well …’

“But,” Sheehan continued, “if you ask them how much [their] organization has invested in bill pay over the last 3 years … the answer - more often than not - is ‘That it’s not something [we’ve] really invested in.’”

This disconnect, Sheehan believes, stems from an old school mindset where bill pay technology is viewed as a “commodity” - rather than an investment into building long-lasting customer relationships.

“At its heart, [modern] bill pay drives and deepens the engagement with our customers,” Wasserman said. In the case of Huntington Bank, his team is seeing “about a 10-to-15 percent lower attrition once someone signs up with bill pay. And you’re twice as likely to be [a consumer's] primary bank when they are engaged in your bill pay.”

But, fortifying customer relationships was only one reason his bank modernized its bill pay platform.

“For us, it was also a point of differentiation in the digital experience,” Wasserman said. “It gave us something that was significantly better than the status quo. It was one of the thrusts that make us different and marketable.”

Pilon, whose role with NCR requires her to work with hundreds of FIs, confirmed she too sees a pattern in the industry where executives treat optimized bill pay as a resource to fortify customer relationships.

But, she added, there is another element that makes state-of-the-art bill pay appealing: revenue.

“Modernized bill pay platforms have the ability to turn bill pay into a revenue generator,” she said, “instead of something that - for years - was seen as just a cost.”

This shifting mindset is forcing some FI decision makers to consider partnering with industry specialists,” she said. “When I talk to executives about bill pay, they say ‘I know I need to make revenue off this. I know it’s table stakes. But, how can I convince my Board to invest in bill pay?’ What I am finding is they don’t know where to go, so I help them with their options.”

That is exactly how things played out for Bardusch and Valley Bank: building a business case for modern bill pay was a “no brainer” for his team, but working with BillGO streamlined the transition.

Bardusch said his institution saw an optimized bill pay experience as something that could set them apart from the competition, which is why they partnered with BillGO to enhance their bill pay menu.

“We’re a smaller organization competing against much larger companies with much deeper pockets,” he said. “So, it’s important that we have strategic partners that provide us with that ideation and innovation. That’s what this is about: having a partner that thinks differently about the business model and helps us provide much deeper and better products and services for our customers.”

In the final installment of BillGO's three-part Bill Pay Knowledge Series, Consumers, Billers & Banks, Oh My!, Russ Chacon, BillGO’s SVP of Product Strategy, shared the stage with analysts from Mercator to discuss how consumers, billers, and banks all benefit from a modernized bill pay platform. Watch a replay of this webinar or any other in the series to help guide your bill pay transformation strategies in 2021 and beyond.

BillGO's Chief Architect, John Brady, breaks down real-time banking: where we are, how we got here and where the industry is headed.
Jun 16, 2021

A conversation with Steve Boms about the benefits open banking brings to consumers, small business owners and FIs.
Jun 9, 2021

An interview with the President and GM of BillGO's Biller Solutions about the evolving accounts payable/receivable landscape.
Jun 2, 2021