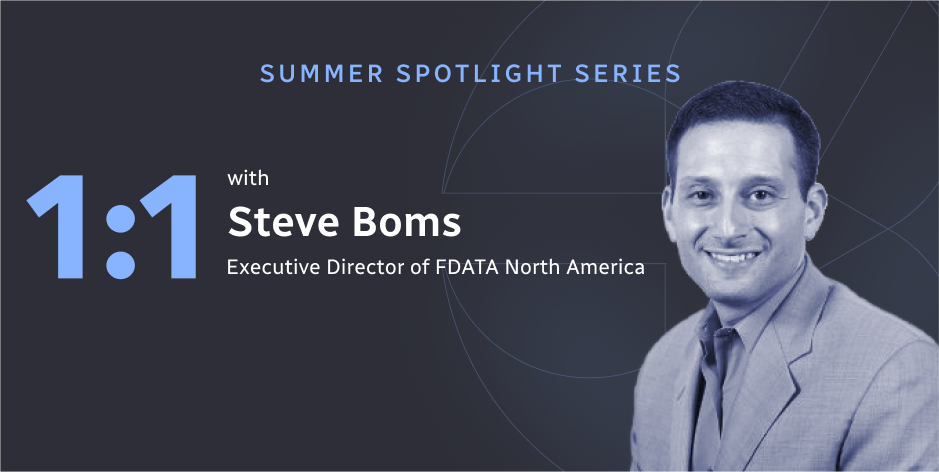 We regularly interview our executive team to give our readers a chance to gain from their industry expertise.

This summer we’ve decided to mix things up, step outside of BillGO, and let readers hear from thought leaders across the industry.

To kick off our Summer Spotlight Series, we sat down with Steve Boms, Executive Director of the Financial Data and Technology Association (FDATA) of North America, an organization founded in 2018 to promote open banking in the U.S., Canada and Mexico.

Boms has more than 15 years experience working with government agencies and tech companies. He is a recognized expert on matters involving financial technology and public policy and has testified before the U.S. Senate, the Senate of Canada, the Organization for Economic Cooperation and Development and other regulatory bodies regarding financial services, technology and consumer access.

BillGO recently joined FDATA, so we asked Boms to discuss the mission of the not-for-profit and how open banking benefits consumers, small business owners and financial institutions.

Let’s start by talking about FDATA ...

FDATA North America is the trade association working on behalf of financial technology firms across the U.S., Canada and Mexico that are developing products and services to improve the financial wellbeing of consumers and small businesses.

We’re working with policymakers to ensure consumers and small businesses have full utility of their financial data and are able to use the service provider of their choice. An open-banking environment would allow fintechs to securely access specific financial data with consumer permission. The data can then be used by fintechs to develop new financial products and services at lower prices to help improve competition.

What is the state of open banking in the U.S. right now?

The short answer is it’s incredibly uneven. For consumers and small businesses, it depends entirely on which FIs they do business with. Some FIs are willing to share data; in other cases, access is entirely limited.

The real answer is we don’t have open banking in the U.S. We have fintechs working to access data.

Compared to other regions around the globe, how does the U.S. rank in adopting open banking?

Europe is leading the way. As of 2015, the European Parliament adopted a directive, known as PSD2, that includes directives to support open banking.

The pithy answer to your question is the U.S. is already far behind the rest of the developed world and we’re getting farther behind every day.

How do consumers benefit by allowing fintechs to access their data?

Right now, this data is being used to power simple fintech tools consumers use to manage their finances.

But there are also hundreds of use cases in development that will significantly expand the financial tools consumers can use to bring more individuals into the financial mainstream and improve their lives.

Without open banking, consumers have no choice. They are entirely beholden to the FIs who control their data. Those FIs get to determine which products and services their customers can and can’t use. Less competition means consumers and small businesses are more likely to be “stuck” with the products their FI offers, giving consumers little say in the price of those products.

The real question is what is the cost to consumers who currently don’t have access to their financial data? If a fintech needs to access cash-flow data, but FIs deny that access, then consumers are being denied choice.

In an open banking environment, consumers and small businesses have the right to use the service providers they chose.  No FI should be allowed to restrict third-party provider access to data if a consumer grants that access.

Where does the benefit to small business owners come in?

Look at the last 18 months. It’s been difficult for business owners in the U.S. - especially minority business owners. Thankfully, millions of them were able to stay afloat because of federal Paycheck Protection Program (PPP) loans.

But - according to the Federal Reserve Bank of New York - the majority of black-owned businesses approved for PPP loans got those approvals by working with fintech lenders. And fintechs could grant those loans because they were able to access the business owner’s financial data quickly and seamlessly.

Going forward, access to business financial data will be even more important. Because of the pandemic, we are entering a time when it is going to be very difficult to get credit. How are lenders going to determine creditworthiness based on the last 18 months?

Two weeks ago, a coalition of 18 consumer groups sent a letter to the CFPB supporting Section 1033 of the Dodd-Frank Wall Street Reform and Consumer Protection Act and asking the CFPB to make open banking a priority.

They wrote Section 1033 “... will be critical to beating back anti-competitive, data-hoarding behavior and putting safeguards in place to protect consumers’ access and control over their data in their financial lives.”

What do you say to consumers concerned about data harvesting? Like we saw play out in 2018 when Facebook allowed Cambridge Analytica to scrape data from 87 million users ... ?

First, open banking is a choice for the consumer.

In the case of the Facebook scandal, there was an egregious misuse of data. Facebook users were not informed about how their data was being used nor were they given meaningful control over that data misuse.

In an open-banking environment, all data use is permissioned. Consumers are given the ability to consent to how their data is used. Open banking even offers consumers an ongoing dashboard so they can see how the data is used.

Secondly, with open banking, there is “data minimization,” which is a fancy moniker meaning fintechs are only given access to the data they need to provide a particular product or solution. Fintechs can only “see” what they need to see for a particular service.

Finally, open banking ensures consumers have the right to be made whole. Right now, if something goes wrong with a payment app, for instance, the consumer may be left between an FI and that app arguing over whose responsibility it is to remunerate that consumer. Open banking ensures tools are in place for remuneration.

Can FIs benefit from open banking?

In many ways, FIs stand to gain the most. Which companies do you think would be best positioned to take advantage of open banking in the U.S.?  It would be those companies that have the most experience and expertise in this space.

Right now, FIs lack visibility into many of the third-party tools connected to the data they hold. With open banking, FIs would gain transparency into the entire ecosystem - as well as the assurance that third parties must comply with required security, governance and insurance standards.

Also - from an opportunity perspective - FIs benefit due to their size and scale. They benefit because they would be better positioned to improve the tools and services they offer their customers.

We’ve seen this in Europe. In the last three years, more than 2.5 million consumers and businesses in the U.K. have begun using open banking-enabled products to manage their finances, access credit and make payments.

For those FIs that support open banking, what can they do to promote it?

They can start by empowering their customers to have complete access to their data. Many well-known FIs are already doing this.

Secondly, they can notify the CFPB of their support.

‍… And those FIs that don’t?

They are on the wrong side of history. We saw this play out similarly in the U.K. At the outset, many large FIs were opposed to open banking. But then a few recognized it to be a good thing and one or two crossed the Rubicon. After that, more and more crossed over.

Right now, in the U.S., we are seeing more and more industry advocates coming on board and we expect to see larger FIs support our efforts in the next couple of years.

What do you say to those who insist the industry - not regulators - should govern and dictate data-sharing policies?

If the industry were capable of doing it, they would have done that already.

It is unreasonable to believe that more than ten thousand FIs could negotiate agreements with thousands of financial data aggregators and fintechs. And even if it were possible, those agreements would all be different, resulting in vastly different outcomes, experiences and protections for consumers and small businesses. Thousands of different contracts would result in uneven customer outcomes, and consumers and small business owners have no transparency into the process.

Industry cannot deliver policy. What industry is really good at is figuring out how to execute against policy.

What can consumers do to support open banking and the efforts of FDATA?

Two things:  First, they should make sure the FIs they use know they support open banking. Financial institutions are beholden to their customers.

Secondly, they should let policymakers and regulators know how they feel.

Those two things may sound small, but they can help move the needle.

Find out what propelled BillGO to join FDATA and how we are working to ensure consumers and small businesses gain access to their financial data.

Only 20 percent of working-age U.S. women are considered financially healthy. Can FIs and fintechs help bridge the divide?
Aug 31, 2022
No items found.