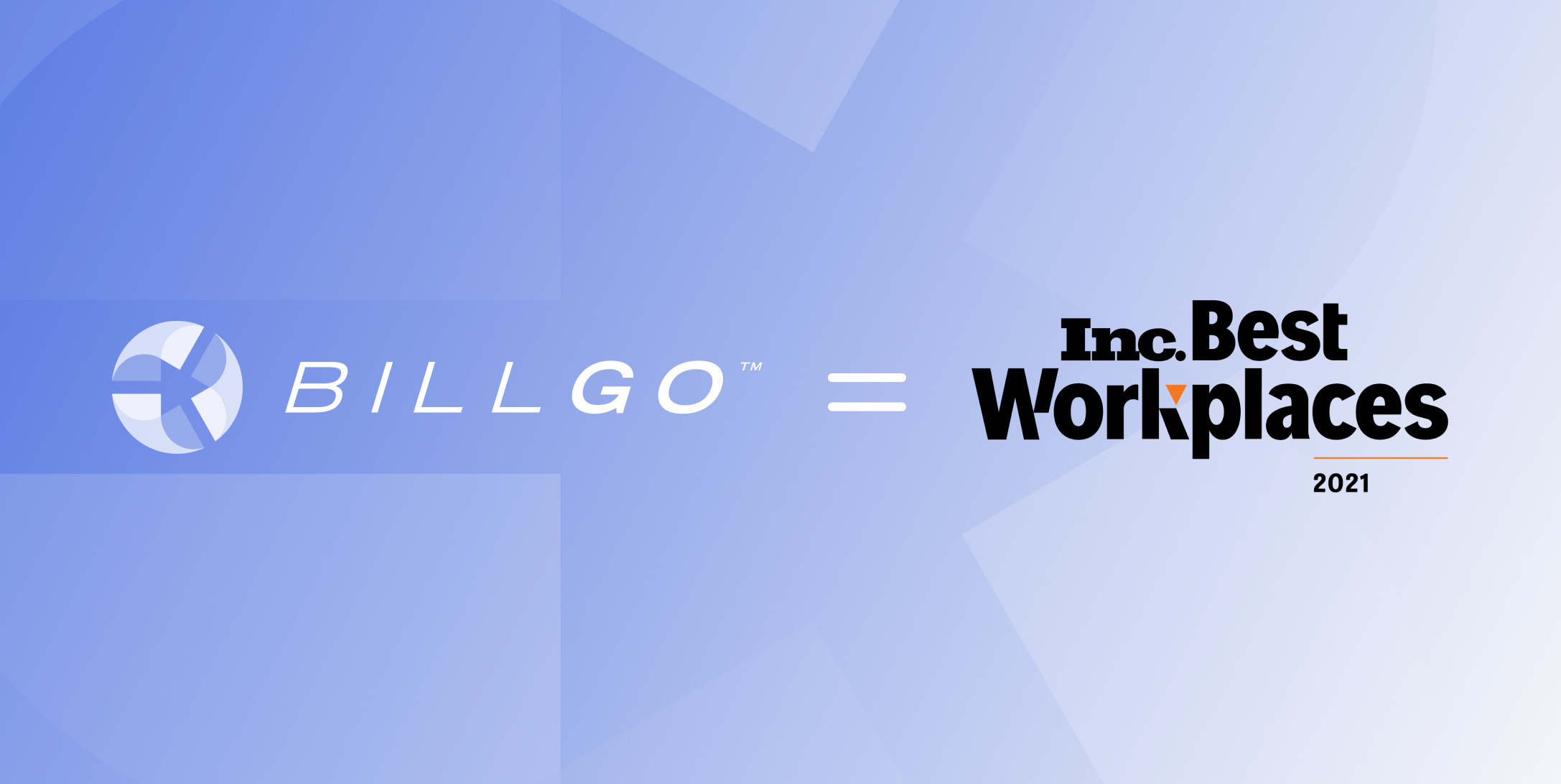 Talk about a trifecta!

Inc. magazine included BillGO on its newly-released list of Best Workplaces in 2021 thanks in a large part to the high marks BillGO employees give the company.

For those keeping score, this latest recognition marks the third time in less than three months a top-tier business publication deemed BillGO to be a first-place employer. Last March, after analyzing employee feedback, both Forbes and Fortune drew similar conclusions. Now, with the Inc. announcement, it appears to be unanimous: BillGO is a company that puts employees first.

In the case of all three publications it was the confidential employee surveys - gathered by independent organizations -  that sealed the deal. When Forbes named BillGO a “top startup to work for in 2021” employee feedback was cited as the main reason, alongside “media coverage, blogs and social posts.”  Employee satisfaction also weighed heavily in the Fortune best place to work finding - specifically how staffers gauged BillGO’s “innovations, values and leadership.”

Now comes Inc., which not only factored in employee satisfaction (as reflected in confidential surveys  measuring employee engagement, trust in management and other factors), but also conducted an independent audit of employee benefits in its tally. In all, more than 3,000 companies vied for a place on Inc.’s Best Workplaces list with only slightly-more than 400 companies making the cut.

“The entire BillGO’s executive team could not be prouder, ” said Dan Holt, CEO and Co-founder of BillGO. “Thousands of companies jostled for a spot on Inc.’s list, but only a small percentage made it. It’s really a credit to the entire BillGO team, because - at the end of the day - every employee has a hand in cultivating a winning company culture and we’ve accomplished that.”

As exciting as it is to earn a “triple crown” for employer recognition, the trio of wins was not without precedent: In 2020, American Banker recognized BillGO as one of the top fintechs employers in the U.S.

But with this latest recognition, BillGO can stand alongside other up-and-coming companies included on Inc.’s 2021 list such as Chime, NerdWallet, HubSpot, Lemonade and GoodRX and others.

And thanks to Inc.com’s 33 million page views each month, this most recent accomplishment will help spread the word that BillGO is helping ensure everyone has access to a healthy financial future by providing consumers, billers, fintechs and financial institutions with a faster, more secure way to pay and manage bills.

Want to be Part of a “Best Place” to Work?

Sound like a company mission you can get behind? Guess what? BillGO is hiring.

If you want to be a part of the bill pay revolution and join one of the highest-ranked companies to work for in fintech, BillGO wants to hear from you.

Check out our careers page to explore current openings, follow us on LinkedIn for hiring updates and announcements and check out our Glassdoor reviews to read what our employees have to say about working at BillGO.

BillGO and the Promise of Real-time Bill Pay

Ubiquitous smartphones and the pandemic have put the demand for real-time payment capabilities into overdrive.
Mar 30, 2022
No items found.