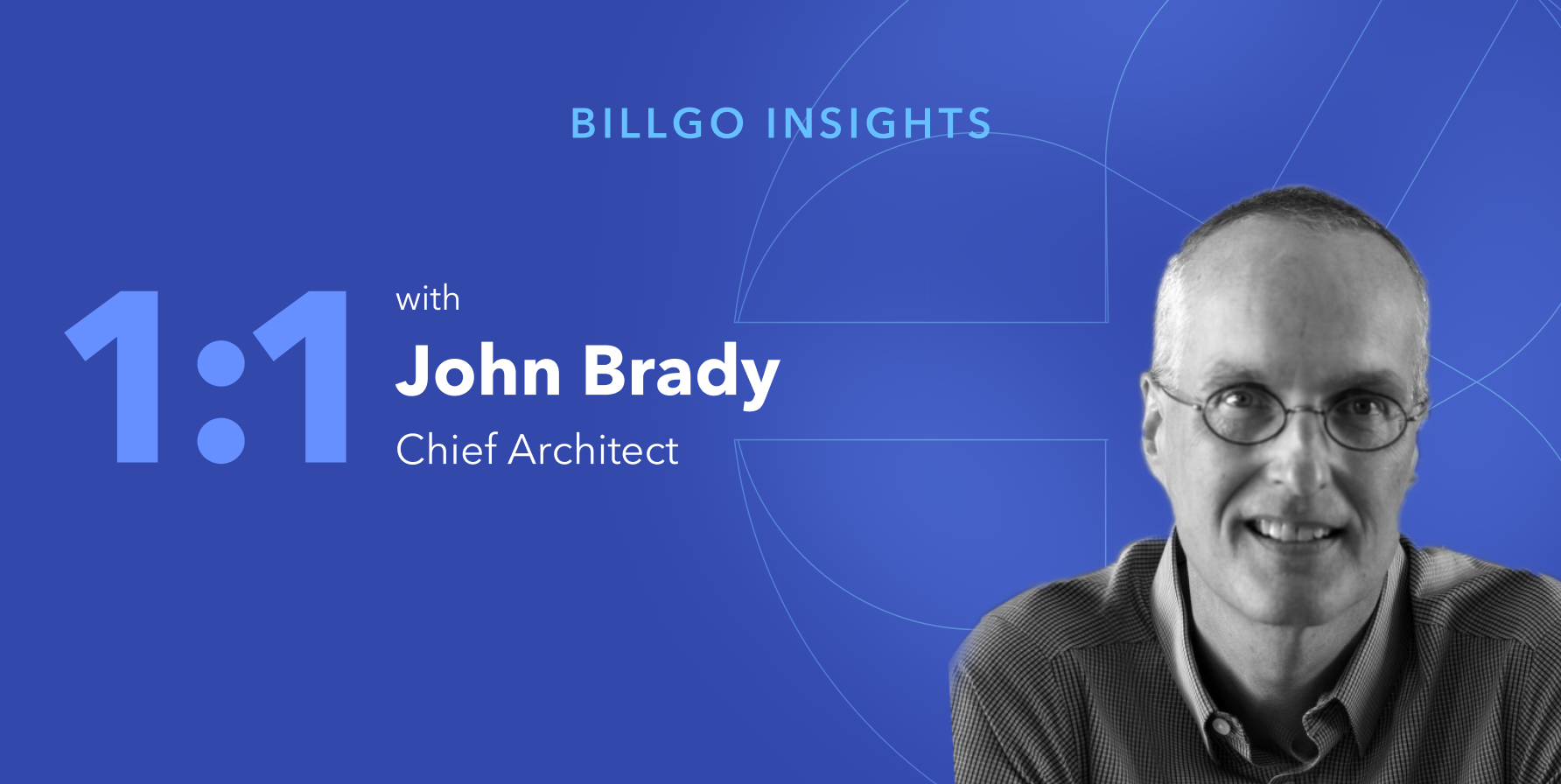 John Brady is BillGO’s Chief Architect. Throughout his career, he has been at the forefront of technological innovation serving in executive roles with such industry leaders as USAA and Fidelity Information Services (FIS). He is a long-time advocate for the advancement of banking and payments functionality in response to the global shift towards real-time solutions, which makes him an ideal addition to the BillGO leadership team.

We sat down with Brady to discuss the real-time payments landscape, transformation planning and how financial institutions (FIs) can accelerate the adoption of real-time bill pay.

What does it mean to be BillGO’s Chief Architect?

You know, I think ‘Chief Architect’ is one of the hardest roles to define because the day-to-day responsibilities vary wildly from one company to the next, but fundamentally, the Chief Architect designs solutions to complex problems. At BillGO, I focus on system availability, information security, data warehousing, network expansion and the API integrations we use to connect banks and fintechs to our platform, among other things.

What prompted you to join BillGO after 30+ years with industry leaders like FIS and USAA?

I’ve been involved in several efforts throughout my career that have helped change the industry—developing some of the core accounting systems that are now deployed in many of the world’s leading banks, launching one of the first implementations of Apple Pay, instrumenting one of the initial launches of Zelle P2P. Now, I believe BillGO is on the verge of changing the industry yet again. I wanted to be here to do what I can to contribute to this industry-wide change.

What kind of change are we talking about?

Real-time payments is the big one. It’s going to fundamentally transform the way banks do everything. Of course, in many cases the banking industry in the U.S. has been slow to adopt real-time capabilities, but I expect to see this wave of transformation come quickly as more institutions get a foothold and others feel the pressure of lagging behind.

Why are some FIs slow to modernize despite the threat of falling behind competitors and challengers?

I’ve been involved in a lot of bank modernization programs throughout my career. One thing I’ve noticed is that banks tend to modernize by region, and usually based on some fundamental economic change that’s occurring in the economy. In China, for example, all the banks went through massive modernization efforts to compete with all the new challengers coming to their shores. In Australia, after the interchange revenue went away from credit cards, banks had to compete with one another in new and different ways, which meant modernizing.

So, in many cases, banks tend to be more reactive than proactive when it comes to modernization?

That’s right. Here in the U.S., the last time we saw pressure like that was after deregulation in the 1980s allowed banks to compete across state lines. There was a flurry of bank mergers that resulted in the development of new core banking systems, but since then, many banks have largely been building on the same tech stack. Fund transfers, bill pay, lending platforms, ACH batch processing—for the most part, these things are built on banking systems that are more than 30 years old.

And you believe real-time payments is the new pressure point?

Absolutely. When I look at the U.S. financial services industry, I think real-time payments represent the single greatest catalyst for the next mass modernization.

Many legacy banks, and even some newer ones, just aren’t set up to handle real-time payments. Those that are will have a significant competitive advantage, but I think we’ll see a lot of rapid modernization across the board as banks position themselves for real-time capability. We’re on the verge of this wide transformation, and we’re starting to see it take shape in bill pay.

Why is bill pay ground-zero for adoption of real-time payments?

It really boils down to the consumer and what they experience. Bill pay is visible, it's engaging, it's sticky—consumers interact with bill pay regularly, and so they are beginning to bring their expectation of real-time capabilities to how they pay their bills. In some cases, institutions offer up an experience that looks and feels like it’s happening in real time. But as consumers become accustomed to what real time actually means, anything less than the real deal risks bringing friction and frustration to the customer experience.

As someone who has created overarching technology visions and roadmaps, what advice do you have for FIs working on modernization plans?

The way I think about it is, whatever you think is going to take 10 years to happen will likely take two years, and what you think will happen in two years might not happen for a decade. It’s sort of inverse thinking, but the main point is to think long-term and incorporate that vision of the future into your roadmap. Then, figure out how to get there through incremental steps. Nothing can be solved all at once; the key is to follow the right order of operations so you can scale up quickly.

With respect to real-time payments, what is the “order of operations” for getting from Point A to Point B?

What about speed? Is there any way for FIs to speed up adoption of real-time capabilities?

I think the whole platform concept makes it easier for institutions to adopt new digital banking technologies and modernize very quickly. If you look at the way platforms are built, even some of the different platform business models like Amazon, eBay and Airbnb, there is a self-service mindset that makes it super easy to get started. It’s no different with real-time bill pay.

How does BillGO fit into the equation?

At BillGO, we’ve focused on self-service enabling our real-time bill pay functionality to make it simple for FIs to sign up and get started. The timeframes we have to bring on banks is just incredible. As we embrace the platform concept further and more banks discover and use our APIs, I see BillGO as a tool for innovation in ways beyond just integrating with a product. FIs can actually build bill pay products on our platform—that’s revolutionary, and it’s one of the reasons why I said earlier that I believe BillGO is on the verge of changing the industry.

Connect with John Brady on LinkedIn and follow BillGO for more industry news, insights and analysis like this.

Not only do these webinars enable you to hear directly from top industry leaders, but they also provide you with step-by-step instructions detailing how your institution can deliver the modernized bill pay services today’s consumers expect.