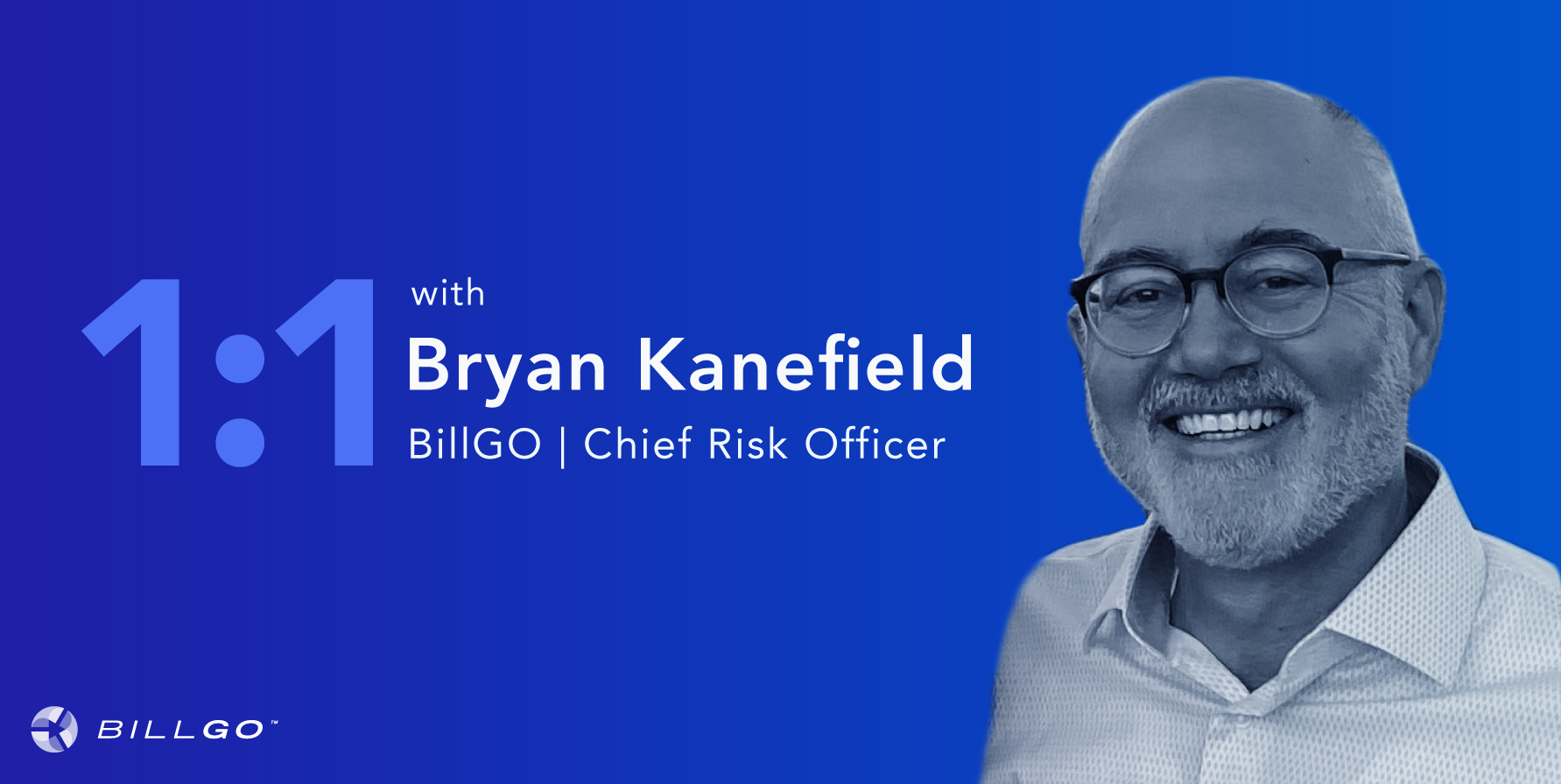 Apple and Amazon built their empires on the foundation of innovation, constantly pushing boundaries and delivering products and services consumers crave.

Innovation has also helped reinvent the financial services industry through user-friendly tools customers can use to manage their personal finances and complete online transactions.

Innovation can deliver outstanding rewards, but those rewards are not without risk. And while a degree of risk can be expected in some industries, when it comes to managing people’s money, risk must be managed with great care.

“There is a fundamental misnomer about what risk management is, “says Bryan Kanefield, Chief Risk Officer at BillGO. “Risk management doesn't always mean operating with zero risk. Instead, it’s about understanding your tolerance for risk and making sure you responsibly manage within your appetite.”

“Changing the way we think about risk allows an organization to make decisions with an awareness of the risks they’re willing to accept,”

Kanefield should know. With more than 30 years of leadership experience in enterprise risk management, corporate governance, strategic planning and operational efficiency in financial services, he is no stranger to striking the proper balance between risk and innovation.

“We [in the industry] need to transform the way we think about risk,” he says. “Risk departments may sometimes be known as the office of ‘no,’ but I've always believed it should be the office of GO — as long as you do so prudently, with guardrails, appropriate analysis, and eyes wide open.”

To Kanefield’s point, in the financial services industry, compliance is often viewed as an inhibitor to innovation and technological advancement, but he is quick to remind other industry execs that one of the primary purposes of regulation is to ensure the achievement of positive long-term outcomes for both the industry and the consumers they protect.

“Changing the way we think about risk allows an organization to make decisions with an awareness of the risks they’re willing to accept,” says Kanefield. “For example, someone may come up with a great new way to approach a product or change a process. My role is to think about how it can be responsibly executed while ensuring compliance with existing laws or regulations.”

In other words, he says, innovation and compliance should be collaborative.

And thanks to that spirit of collaboration, the lines between traditional financial institutions (FIs) and fintechs have started to blur.

"When FIs collaborate with fintechs, they expect fintechs to be on par with their definition of compliance, including oversight, security, and risk management,”

Where once, some traditional FIs voiced concerns that smaller (less-regulated) fintechs might be putting them at a disadvantage, many FIs now see the value in treating fintechs as collaborators rather than competitors.

“When FIs collaborate with fintechs, they expect fintechs to be on par with their definition of compliance, including oversight, security, and risk management,” says Kanefield.

“What BillGO has to be is the engine that could,” he says. “We may not have the same scale as major banks, but BillGO works to make sure we are on the same level when it comes to the [compliance] capability and the caliber we bring to the table.

“As long as we can deliver a value proposition that's meaningful for them and their customers and can deliver not just on the economics but with a comparable level of operational excellence and regulatory compliance, then the won’t be a major barrier,” Kanefield says.

The Cost of Compliance

One pain point both FIs, and fintechs share is the ever-increasing costs associated with compliance. According to one study, large enterprises can pay up to $10,000 annually — per employee — to remain compliant. In addition, compliance spending has increased by more than 60 percent since before the financial crisis, says Deloitte.

"Compliance is the price of admission. There's no question of whether or not it's worth it. If you want to play in the space, you have to comply or put your reputation and long-term viability at risk."

Kanefield is aware of the frustrations associated with those costs, but, he says, the cost of non-compliance may be just as steep, if not more.

“Compliance is the price of admission,” he says. “There’s no question of whether or not it’s worth it. If you want to play in the space, you have to comply or put your reputation and long-term viability at risk.”

Kanefield has seen compliance-related expenses rise firsthand. Prior to joining BillGO, he served as Chief Risk Officer for both The Clearing House and MERSCORP Holdings, Inc. Before that, he worked in key compliance-leadership roles, including serving as Director of Operational Risk with Fannie Mae.

Throughout his career, he has seen organizations, large and small, manage through increasing compliance-related expenses but understands that it’s the cost of doing business.

“Organizations have to be able to deliver on that, but I don't think there's any question that the cost of doing that has continued to rise. And I think there will continue to be some pushback on how much that overhang is,” says Kanefield.

After nearly three decades of overseeing several highly talented risk management teams in the industry, what attracted Kanefield to join BillGO as the Chief Risk Officer?

“One was the people. When I met with the executive team, I recognized a really strong and inspired group of people, which has been doubly confirmed since my first day,” he says.

“Second is the depth and caliber of the talent. The knowledge and capability BillGO has in the payments space is impressive,” Kanefield says. “Also, it was a natural transition from The Clearing House, which is involved in the main payment rails, and BillGO’s connection to the space was a big driver.”

“Third is the vision for the organization. The opportunity BillGO has to lead in the space is so evident.”

Whether you are an executive overseeing an established financial institution or running a fast-paced fintech, it is essential you understand your customers’ needs.

BillGO’s latest eBook, Winning the Battle for Bill Pay, delivers a dozen pages of research from Aite Group, PYMNTS, Mercator and others detailing what consumers want and need in bill pay technology.

The financial services industry can’t afford to delay a ‘digital first’ mindset. Collaboration between FIs and fintechs may be the answer.
June 8, 2022

Joining the not-for-profit enables BillGO to work with other top fintechs fighting on behalf of consumers.
April 28, 2021